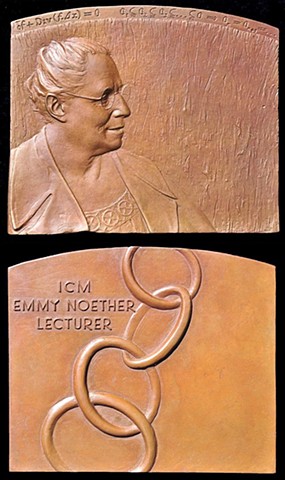 Multiples of medallions are traditionally die-struck at a mint, like coins. But that process relies upon the force of the die to deform solid metal, and thus imposes limits on the overall size of the piece, and on the depth and detail of the relief that can be achieved. Sacrificing the efficiency and regularity of die-casting by a commercial mint, I opted for another process – more aesthetically hazardous – that would allow me greater sculptural freedom, higher relief, and increased detail. That technique is ceramic shell lost wax casting. It is a technique that entails many steps, and the quality of the bronze cast is very much at the mercy of the craftspeople who attend to each step once the artwork itself is completed.

I began by modeling Emmy Noether’s portrait (for the obverse) and Noether’s Ring Theory (for the reverse) in oil clay. I sized these to be approximately three times the final plaquette size, keeping in mind the shrinking of detail and the difficulty of casting thirty small plaquettes.

After completing bas-reliefs, the artist usually has flexible silicone or rubber molds made, from which sturdy plaster models are cast. The artist’s work is safeguarded by making these molds. Instead, I very carefully packed the clay models in suitcases and drove them, cushioned by many pillows, to a 3D scanning company in Connecticut that produces aeronautical scans. After both clay bas-reliefs were scanned, the digital models were reduced by two-thirds. I reviewed the computer images with an engineer, and had him make small improvements to the designs. For example, he “cleaned-up” Emmy Noether’s formulas above the portrait, making them easier to read. These scans were emailed to a CNC company that mills 3D scans of sculptures. After milling the obverse and reverse of the plaquette in hard wax, a craftsperson fused the two sides together, forming a single master model.

I received the fragile wax model by mail. I chased (re-worked) the wax by hand somewhat, restoring the very delicate earpiece, for example, which had popped-off in transit, and also reinforcing some textures. Next, I shipped the wax master model to a foundry that casts only small sculptures. A mold maker created a two-piece silicone mold. It is a perfect negative impression of the hard-wax master model, and was used to create the edition of plaquettes.

Silicone molds cannot withstand the heat of molten bronze, so another cycle of positive (model) to negative (mold) must occur. Foundry workers made single-use ceramic shell molds into which molten bronze was poured. They first made wax plaquettes by pouring molten wax into the silicone master mold. When cool, they attached wax gates and sprues to these casts; they would become the channels through which the molten bronze would enter the ceramic shell, and gases would escape.

The wax plaquettes were then dipped in a slurry of refractory ceramic, forming a shell around each wax. The ceramic shells were fired in a kiln, burning out the wax plaquettes and creating durable molds. To make the edition, molten bronze was poured into the ceramic shell molds. When cool, foundry workers released the rough bronzes by breaking the ceramic shells. They removed the gates and sprues, (now also bronze), ground edges clean and inspected the casts.

I received and inspected the edition of bronze plaquettes and returned unacceptable casts to the foundry, where more casts were made to complete the edition. I chased each bronze cast, grinding, filing, engraving, and burnishing them to my satisfaction. Finally, I took the bronzes to a patina master, who cleaned, heated and applied with a stiff brush, a two-part patina to every bronze. I accepted most of the patinas, but again, rejected a few and left them to be re-patinated. Due to the production process, the plaquettes are not quite identical. Each has small, hand-wrought variations.

To the right of the rings on the reverse side of the bronze plaquette a space is reserved for the name and year of the Emmy Noether Lecturer, to be engraved shortly before the honoree delivers her lecture at the International Mathematical Union conference, an honor bestowed once every four years. The engraving of the name and year of honoree is the very last step in the process of making an Emmy Noether Lecturer plaquette.